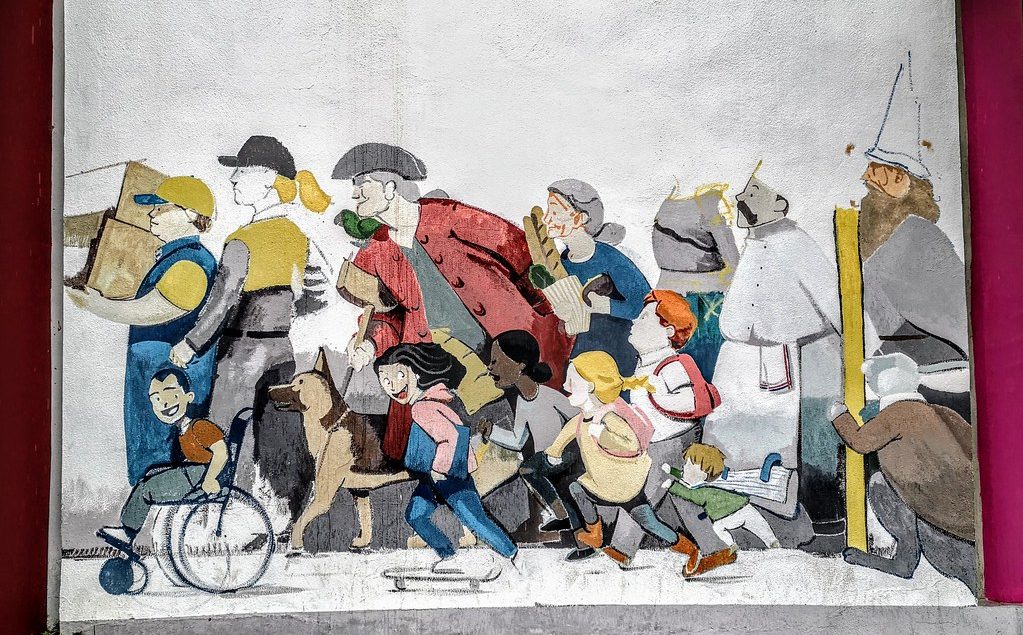 The pandemic now sweeping the planet is one of those historic events that will change many basic premises of modern life. Let us act swiftly to deal with the emergencies, but let us also seize the opportunity to think about long-term system change. If there is one thing that the pandemic confirms (in tandem with climate change), it is that our modern economic and political systems must change in some profound ways. And we are the ones who must push that change forward. We’ve already seen what state officialdom has in mind — more bailouts for a dysfunctional system. Serious change is not a priority at all.

However, pandemics are hard to ignore. Many ideas once ignored or dismissed by Serious People – commoning, green transition policies, climate action, relocalization, food sovereignty, degrowth, post-capitalist finance, universal basic income, and much else – now don’t seem so crazy. In fact, they are positively common-sensical and compelling.

The pandemic has been horrific, but let’s be candid: It has been one of the most effective political agents to disrupt politics-as-usual and validate new, imaginative possibilities.

Many things are now less contestable: Of course our drug-development system should be revamped so that parasitic corporate monopolies cannot prey upon us with high prices, marketable drugs rather than innovation, and disdain for public health needs. Of course our healthcare system should be accessible to everyone because, as the pandemic is showing, individual well-being is deeply entwined with collective health. Of course we must limit our destruction of ecosystems lest we unleash even greater planetary destabilization through viruses, biodiversity loss, ecosystem decline, and more.

In this sense, covid-19 is reacquainting us moderns with some basic human realities that we have denied for too long:

Notwithstanding these general assumptions of modern life, we humans are discovering that we are in fact programmed to help each other when confronted with disasters. As Rebecca Solnit chronicled in her memorable book A Paradise Built in Hell, earthquakes, hurricanes, and gas explosions spur human beings to self-organize themselves to help each other, often in utterly sublime, beautiful ways. It’s a deeply human instinct.

The early journalism about covid-19 confirms this human impulse. Just as the Occupy movement mobilized to provide essential relief in the aftermath of Hurricane Sandy, mutual aid networks are now popping up in neighborhoods around the world, as the New York Times has noted.

The Times cited the great work of Invisible Hands, a network of 1,300 NYC young people who spontaneously peer-organized in three days to deliver groceries to at-risk people who can’t venture out of their homes. The piece also cited this radio segment on mutual aid on Amy Goodman’s show, Democracy Now!

Check out a number of useful links in the article to other mutual-aid efforts, including a massive Google Doc listing scores of efforts in cities around the US, and a pod mapping toolkit. And check out the Washington Post’s piece on how a website for neighborhood cooperation, Nextdoor, has become a powerful tool for people to help each other through the pandemic.

The mainstream world likes to refer to such peer-assistance as “volunteering” and “altruism.” It is more accurately called commoning because it is more deeply committed and collective in character than individual “do-gooding,” itself a patronizing term. And surprise: it sometimes comes with disagreements that must be resolved – but which can end up strengthening the commons.

A thoughtful piece on the role of anarchism in surviving the pandemic notes that mutual aid “is the decentralized practice of reciprocal care via which participants in a network make sure that everyone gets what they need, so that everyone has reason to be invested in everyone else’s well-being. This is not a matter of tit-for-tat exchange, but rather an interchange of care and resources that creates the sort of redundancy and resilience that can sustain a community through difficult times.”

The vexing question for the moment is whether state power will support mutual aid over the long term (it may be seen as a threat to state authority and markets) — or whether Trump-style politicians will use this moment of fear to consolidate state control, increase surveillance, and override distributed peer governance.

Another important question for the near-term is:  Can we develop sufficient institutional support for commoning so that it won’t fade away as the red-alert consciousness of the moment dissipates. To that end, I recommend Silke Helfrich’s and my book Free, Fair and Alive You may also want to browse the governance toolkit on CommunityRule.info or look into Sociocracy for All.

Throughout history commoning has always been an essential survival strategy, and so it is in this crisis. When the state, market, or monarchy fail to provide for basic needs, commoners themselves usually step up to devise their own mutual-aid systems.

In so doing, they are illuminating the structural deficiencies of conventional markets and state power. As we gave seen political agendas and profiteering have often been higher priorities than public health or equal treatment, as the $2.2 trillion bailout bill passed by the US Congress suggests. President Trump has been more obsessed with reviving the market and winning re-election than in saving people’s lives. Consider how many corporations are more intent on reaping private economic efficiencies (offshoring medical facemask manufacturing; closing down access to cheap generic drugs) than in allowing collective needs to be met effectively through government or commoning.

Numerous commentators are pointing out how the pandemic is but a preview of coming crises. It’s not been mentioned much that covid-19 is partly the result of humans encroaching excessively on natural ecosystems. The UN environment chief Inger Anderson has said that biodiversity and habitat loss are making it easier for pathogens to jump from “the wild” to humans.

And ecologist Stephan Harding has a wonderful piece on how Gaia seems to be trying to teach us to see the dangers of unlimited global commerce: “We are seeing right now how in an over-connected web a localised disturbance such as the appearance of a fatal virus can spread and amplify very quickly throughout the system, reducing its resilience and making it more likely to collapse.”

At this juncture, many massive, pivotal choices await us. We must decide to rebuild our provisioning systems on green, eco-resilient terms, not on neoliberal fantasies of unlimited growth and tightly integrated global markets. New/old types of place-based agriculture, commerce, and community must be developed.

This will entail a frank reckoning with how we re-imagine and enact state power, writes Yuval Noah Harari, author of Sapiens, in the Financial Times: “The first [choice] is between totalitarian surveillance and citizen empowerment. The second is between nationalist isolation and global solidarity.” Harari warns:

Humanity needs to make a choice. Will we travel down the route of disunity, or will we adopt the path of global solidarity? If we choose disunity, this will not only prolong the crisis, but will probably result in even worse catastrophes in the future. If we choose global solidarity, it will be a victory not only against the coronavirus, but against all future epidemics and crises that might assail humankind in the 21st century.

Obviously, I think the commons has a lot to contribute to citizen empowerment and global solidarity. Hope lies in building new systems of bottom-up, place-based provisioning and care that are peer-governed, fair-minded, inclusive, and participatory. Hope lies in federating diverse commons so that they can coordinate and reach more people – accountably, flexibly, effectively, with resilience.

State institutions may be able to play positive roles, mostly in providing general rules, coordination, certain types of expertise, and infrastructure. Beyond that, they should focus on empowering people and smaller-scale governance and thereby engender trust in collective action.

It is still too early to know how the pandemic will unfold and resolve. There are too many complex variables play to predict the many ramifications. However, it is clear enough that this pandemic calls into question MANY elements of today’s neoliberal market/state order, whose institutions and political leadership are either dysfunctional or uncommitted to meeting public needs. It’s not just individual politicians; it’s a systemic problem. Yet the rudiments of a coherent new system with richer affordances have not yet crystallized.

So that may be our ambitious task going forward. Commoners and allied movements, disillusioned liberals and social democrats, people of goodwill must thwart the many retrograde dangers that threaten to surge forward under the cover of fear. But we must also, simultaneously, demonstrate the feasibility of new forms of commoning, infrastructure, finance, and commons/public partnerships. Rarely have needs and opportunities been so aligned!